A desktop version of the official translator from Google 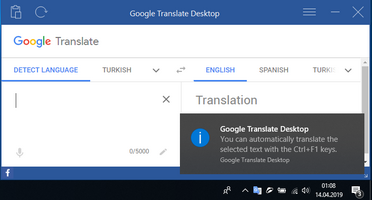 Advertisement
Google Translate Desktop is the desktop version of the famous translator created by Google. Without a doubt, this translation app is the most powerful one on the market right now. That's why its developers are tireless in their aim to improve and make this translation tool more and more precise.

Google Translate Desktop works pretty much the same way as the mobile version. There are just a few changes in the design of the interface and its adaptation for different computers.

To translate any text, you just have to enter each one of the sentences or words you want to translate and select the language or let the program detect it automatically. On the other hand, in the box on the right you can see each chain of translated characters. You'll also have the classic arrow button that will help you change the content between both text boxes. You'll even have the box to listen to the pronunciation in a matter of seconds.

With Google Translate Desktop, it'll be easy to translate any content between the various languages spoken around the world. In fact, the tool offers endless language options so you can understand any text regardless of where in the world you found it.
By Raúl Rosso
Advertisement